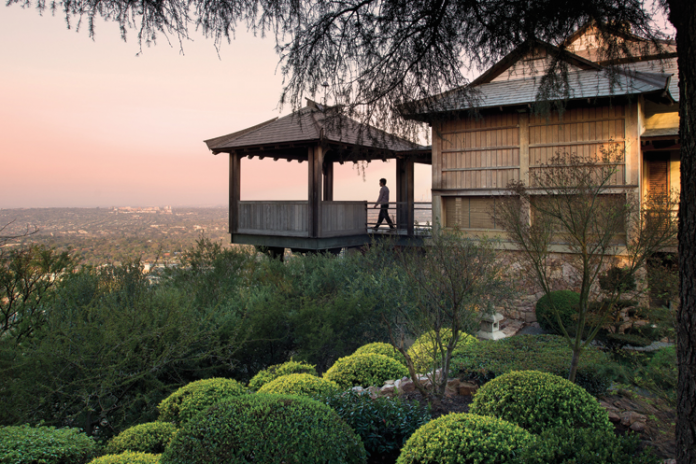 Perched high on the Northcliff Hill, this serenely modern home was inspired by its owners’ close affinity with the east.

Surrounded by immaculately trimmed hedges, this Japanese-inspired home on Northcliff Hill has unprecedented views across Johannesburg. The exterior is clad in teak.

High above the craggy slopes of Northcliff, a blustering wind signals the onset of summer. Far below, a dusty Joburg unravels all the way from Sandton City to Krugersdorp. It’s a view I haven’t seen for a decade and it’s singularly striking. Incongruously green against the Highveld setting, it’s the garden of this hillside home that you notice first. Meticulously groomed, its cloud-shaped shrubs and gravelled pathways set the scene for the double-storey building beyond. When the owners first saw this site – a perilously steep cliffhanger of a property above World’s View – they knew it was the perfect setting for their new home.

‘My clients envisaged a modern Joburg house with a distinctly Japanese feel,’ says architect Cornell van der Westhuizen of CC Architects. ‘That thread extends throughout, from the layout and interior finishes to the garden and internal courtyard.’

While a Japanese-inspired home on the Highveld is a contradiction in itself, both parties agreed that the indoor-outdoor connection was key. ‘The Japanese philosophy is to defer to nature, rather than impose yourself on it,’ adds Cornell. ‘With this spectacular macroview, though, it didn’t make sense to set the house back from the cliff. We brought it right towards the precipice, and as a result you’re constantly aware of the elements. The sunsets and the Highveld storms are quite spectacular; they form a sort of wallpaper for the house.’ 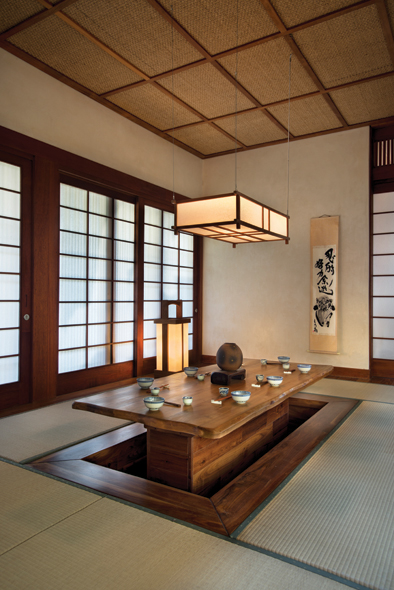 The owners’ desire for a tranquil living space is more than a passing whim. For 30 years one of the owners has practised Ninjutsu, the Japanese martial art with a 2 000-year history. ‘I train with the current grand master and have travelled to Japan every year since 1991,’ he explains. Several years ago he developed a dojo on the neighbouring property, and remains a Ninjutsu instructor in between his many business interests. ‘This involvement certainly gave me an appreciation of the philosophy and attention to detail of the Japanese,’ he explains. ‘Although we’re right in the heart of Joburg, the house is remarkably quiet, a real escape from the bustle and the traffic. We have the connection to the view, but we also have the calmness of the internal courtyard.’

Once you’ve walked beneath the solid leadwood archway into the main entrance, it’s the gleam of timber that catches your attention. ‘It was important to include natural materials, and we used a lot of wood and glass,’ says Cornell. The floors were laid with engineered walnut boards throughout, and the doors and window frames are merbau. ‘Rather than a flat plaster finish, we used a mix of Cretestone and Rhinolite on the walls to give a natural variance in colour and texture.’ But perhaps one of the most recognisably Eastern features is the rice-paper screens – a detail that’s echoed in the opaque glass insets on the garage doors.

Designed with both outward and inward-looking views in mind, the ground floor houses the main living areas. The kitchen, dining and living rooms surround a miniature Japanese garden, accessed via glass sliding doors. Turn the other way and there’s a seamless connection to the pool deck with its rolling Highveld vistas. Put simply, it would be sacrilege to detract from that view with overly fussy furnishings.

‘We’re lucky in that we both like the same things in terms of décor,’ says the couple. ‘We favour a clean, modern, uncluttered look, although that’s not always easy with small children around!’ When it came to the furniture, the owners specifically chose not to look for Japanese pieces. ‘They can often look quite dark and antiquey, so we opted for modern designs like the Pop chairs in the living room. They’re so comfortable but still suit the architectural theme.’ 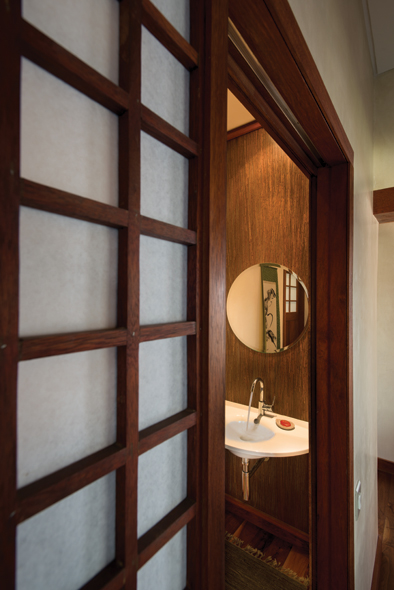 Situated at opposite ends of the inner courtyard, the sunken dining room and sleek, modern kitchen are both highly practical and easy on the eye. ‘We love having friends around, and the Japanese dining room has provided many wonderful evenings
with delicious sashimi and too much sake! The bar stools in the kitchen often result in dinners going no further than the kitchen counter, so there are plenty of useful spaces for entertaining. We intentionally chose the all-white, clinically modern kitchen as a foil for the timber accents and more classical Japanese elements.’

When you wander out into the garden, there’s a tangible sense of peace, of time slowing down. ‘It’s a bit like being on a permanent retreat,’ admit the owners. Deftly trimmed English privets and gently rounded lobelia shrubs meander around several massive boulders and a generous koi pond. ‘You can’t be too choosy with plants, so we opted for things that prune and shape well, and that change their leaf colour throughout the year. Japanese maples are wonderful in that way, as is the dwarf bamboo with its variegated foliage.’ Rising above the garden, the house forms a pleasing backdrop with its distinctively curved roofline. It might be on Northcliff Hill, but its spirit is essentially Oriental.

In the Northcliff Zone

While this hilly part of Northcliff is renowned for its views, it’s also remarkably well positioned. ‘We’re close to pretty much everything we need – preschools, good medical facilities and shops, and easy access to the highway,’ say the owners. ‘Our son is currently at a preschool called Kidzone. It’s a fantastic facility that combines education, fun and confidence-building activities and really focuses on bringing out the best in each child.’ To catch up with friends over breakfast or lunch, the couple rates Petits Fours in the Verdi Centre. ‘Of course you can’t beat our local Impala Fruiterers for its huge variety of fresh produce and helpful staff. For braais, the Impala Meat Centre has the best rugby wors (with chilli and tomato) in town! And for fresh fish, the Seven Seas Fisheries on Beyers Naude Drive is just minutes’ away.’