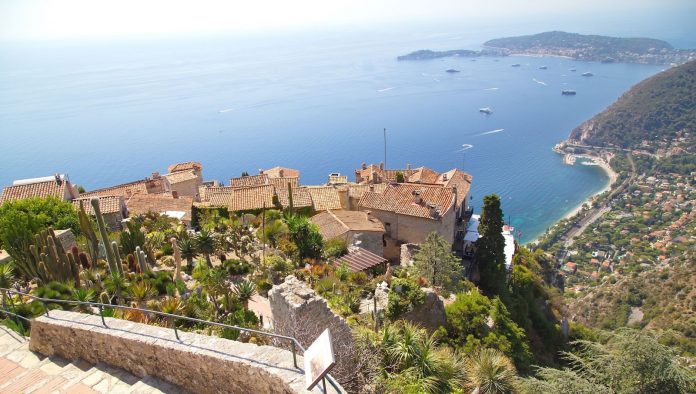 The coastal glamour of the French Riviera is undeniably magnificent, but there’s another dimension to the French Riviera, where the past lingers on in an ancient Mediterranean landscape. Up in the medieval hill villages, another French Riviera waits: one of timeless beauty and a beating Provencal heart.

In the perched villages, flowers line the cobbled streets and shade is found in the vaulted passageways where worn flagstones have become slippery with the passage of time. Boutiques and galleries lie beneath thick rampart walls, and archways cut from the stone frame stunning views of bougainvillea and sea. Locals play pétanque in dusty squares where centuries-old trees throw their dappled light, and white cloth tables sit on restaurant tables high above the glittering Cote d’Azur.

From mountain eyries to artist’s colonies, we take you through the best hill villages to visit on your French Riviera yacht charter.

Sainte Agnes: A Mountain Eyrie with a Medieval Heart

Considered one of the most beautiful villages in France and also the highest coastal village in Europe, Sainte Agnes is breathtaking. At over 800m above sea level, Sainte Agnes is perched like a lonely mountain eyrie along that dizzying stretch of the Riviera where the mountains rise up sheer from the sea. While located only a few kilometres inland from the gloriously pretty port town of Menton, the road up to Sainte Agnes is steep and winding, which deters some tourists and keeps the picturesque cobblestone streets of Sainte Agnes (relatively) peaceful even in high summer. 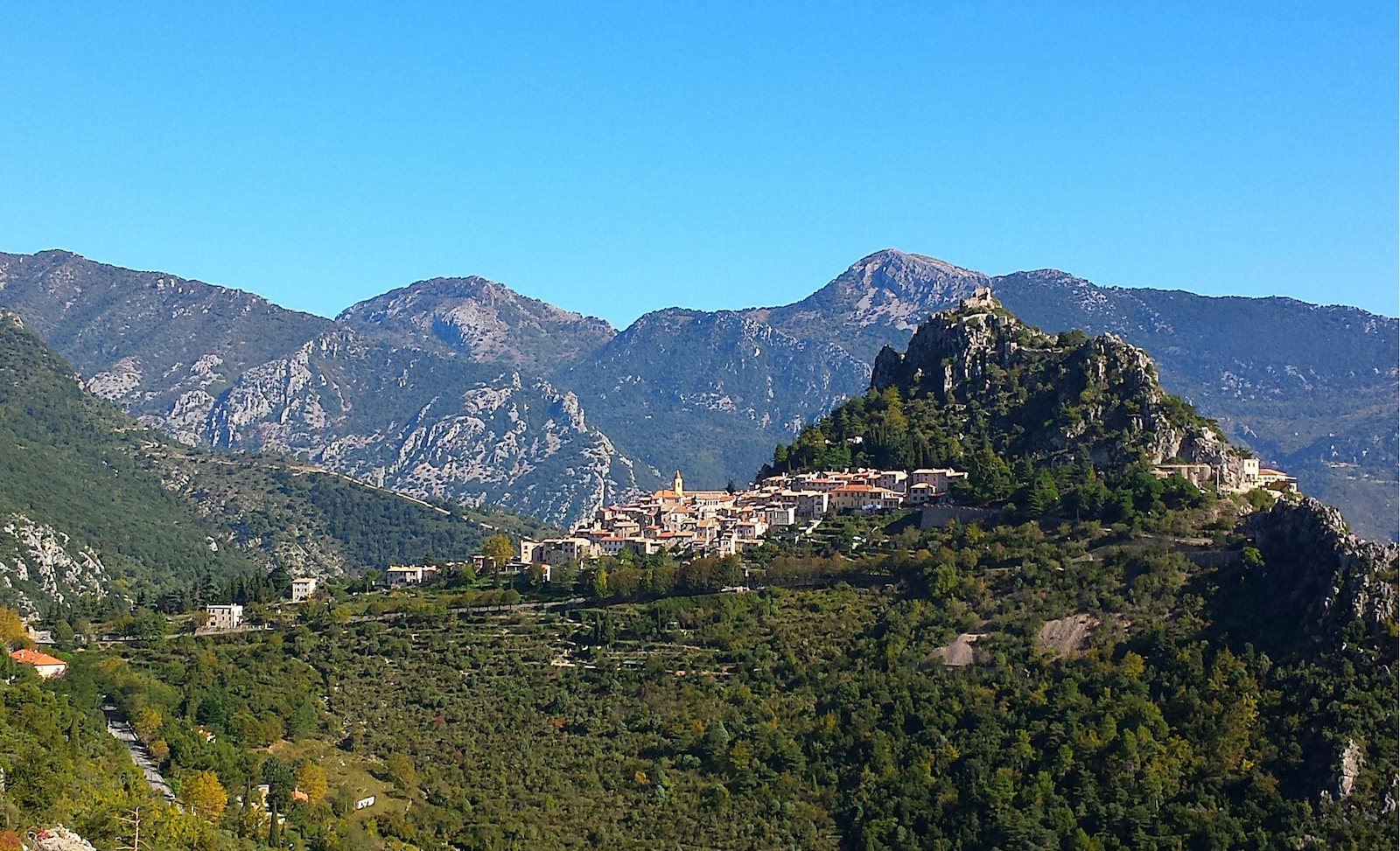 Surrounded by towering mountains and endless Mediterranean views, Sainte Agnes is wedged up against the Italian border and has long been of strategic importance, with border battles raging from the 14th century right through to the construction of Fort Maginot in 1932. Admire the baroque beauty of the Notre-Dame-des-Neiges church, shop in the stone artisans’ cottages, or take the steep walk up to the ruined 10th-century castle and medieval gardens, which carry a charming legend of a Saracen prince who fell in love with a local Provencal girl.

The view from the village of Eze is one you’ll remember for a lifetime. Perched on a precipice 400m above the Mediterranean, Eze village commands a heartbreaking view along the vertiginous coastline of the French and Italian Rivieras, where the Alps drop away sheer into the cobalt blue sea. The village is constructed on the site of a 12th century castle, and the town is magnificently preserved, with pale stone villas wrapped in ivy and pink splashes of bougainvillea, and flowerpots decorating window sills beneath bottle-green shutters. Stroll through the maze of cobblestone laneways, enjoying the cool shade of vaulted passageways, and browse the pretty boutiques. While in Eze, you must visit the famous sub-tropical garden on the cliff-top, where giant cacti stand as quiet sentinels against a backdrop of sky and sea. 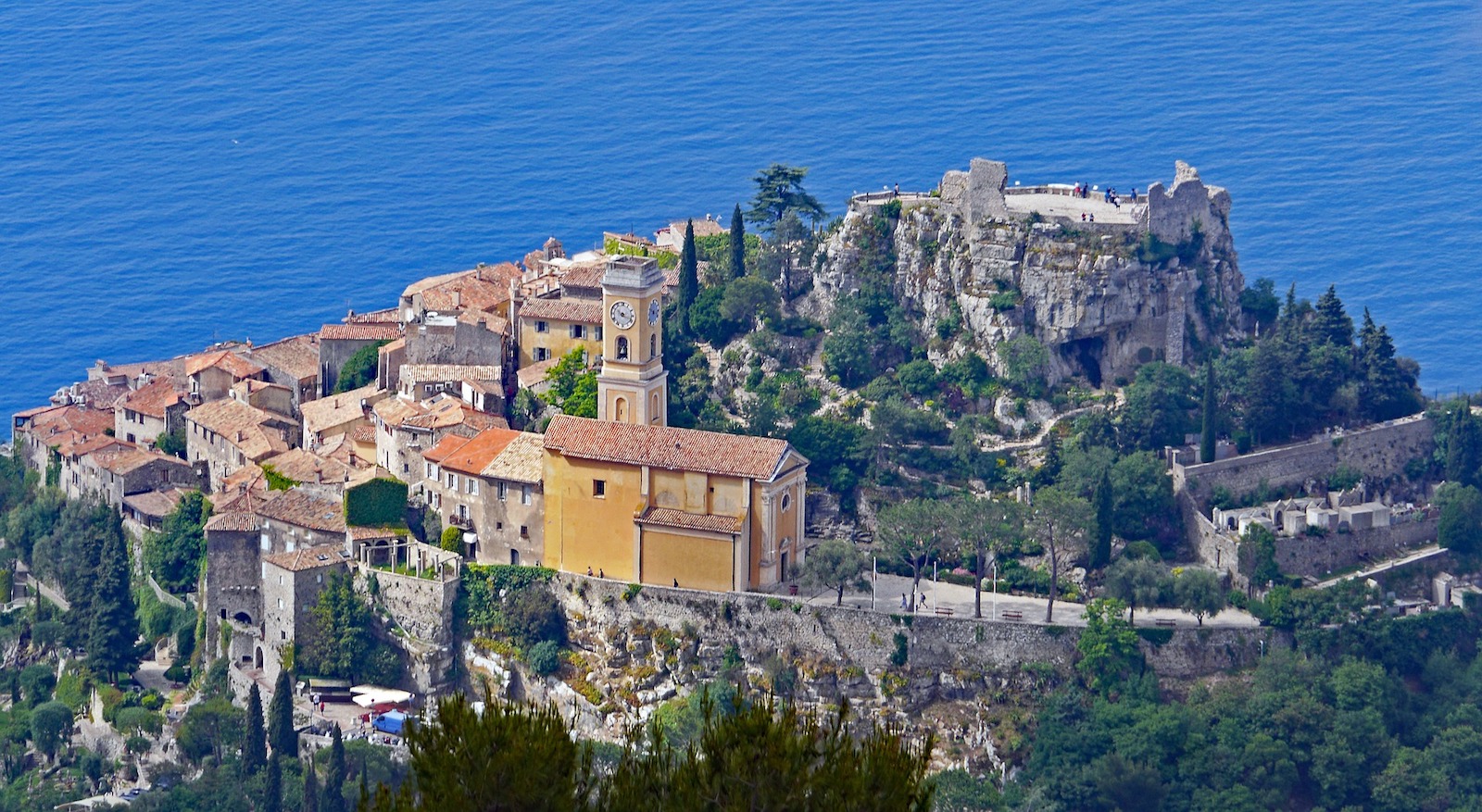 Local’s tip: For all its beauty, the crowds in Eze can be punishing, particularly on days where cruise ships disgorge their camera-toting thousands on Monaco or Nice. This is why we advise arriving in Eze early in the morning to explore the town, then retreating to the utter paradise that is the Hotel Chevre-d’Or for a two-star Michelin lunch.

Ah, Gourdon, where the parachutes of paragliders float over the medieval village as if in a painting, drifting on breezes that rise up from the valley floor far below. Once the holiday destination of Queen Victoria and voted one of the most beautiful villages in all of France, Gourdon is built on the spur of a 500m cliff, and it offers dizzying views across the forested Gorge du Loup and to the distant coast and Esterel mountains. If you’re lucky, you’ll see golden eagles soaring through the sky, their vast wingspan silhouetted against the sun.

Amble through the white stone village, pause in the main square for jaw-dropping views, and visit the lovely lavoir, with its long-ago echoes of Provencal women washing clothes and fetching water still hanging in the air. The Gourdon castle is a highlight with its gargoyles and paved courtyards, while the gardens, designed by Le Notre of Versailles fame, are utterly magnificent. Gourdon is full of artists’ studios and boutiques, where you can buy blown glass, perfumes and soaps, and delicious honey-spiced bread and nougat made with local honey.

St Paul de Vence is a deliriously pretty walled village with lovely views of the Mediterranean, but that’s not what makes it famous.  The great artists—Modigliani, Picasso, Chagall, Miro— ‘discovered’ this incredibly well-preserved medieval town from the 1920’s onwards, and nearly a century on, the town honours that artistic legacy with an abundance of artisan workshops, art galleries, and museums. The real treat for art-lovers here is twofold. The first is the Fondation Maeght museum, an outstanding collection of sculptures and paintings by Calder, Miro, Chagall and Giacometti. The second is the superb Colombe d’Or Hotel, where the dining room walls are hung with artwork by Matisse, Picasso, Léger, and Chagall, who paid their room and board with their paintings during the dark war years. 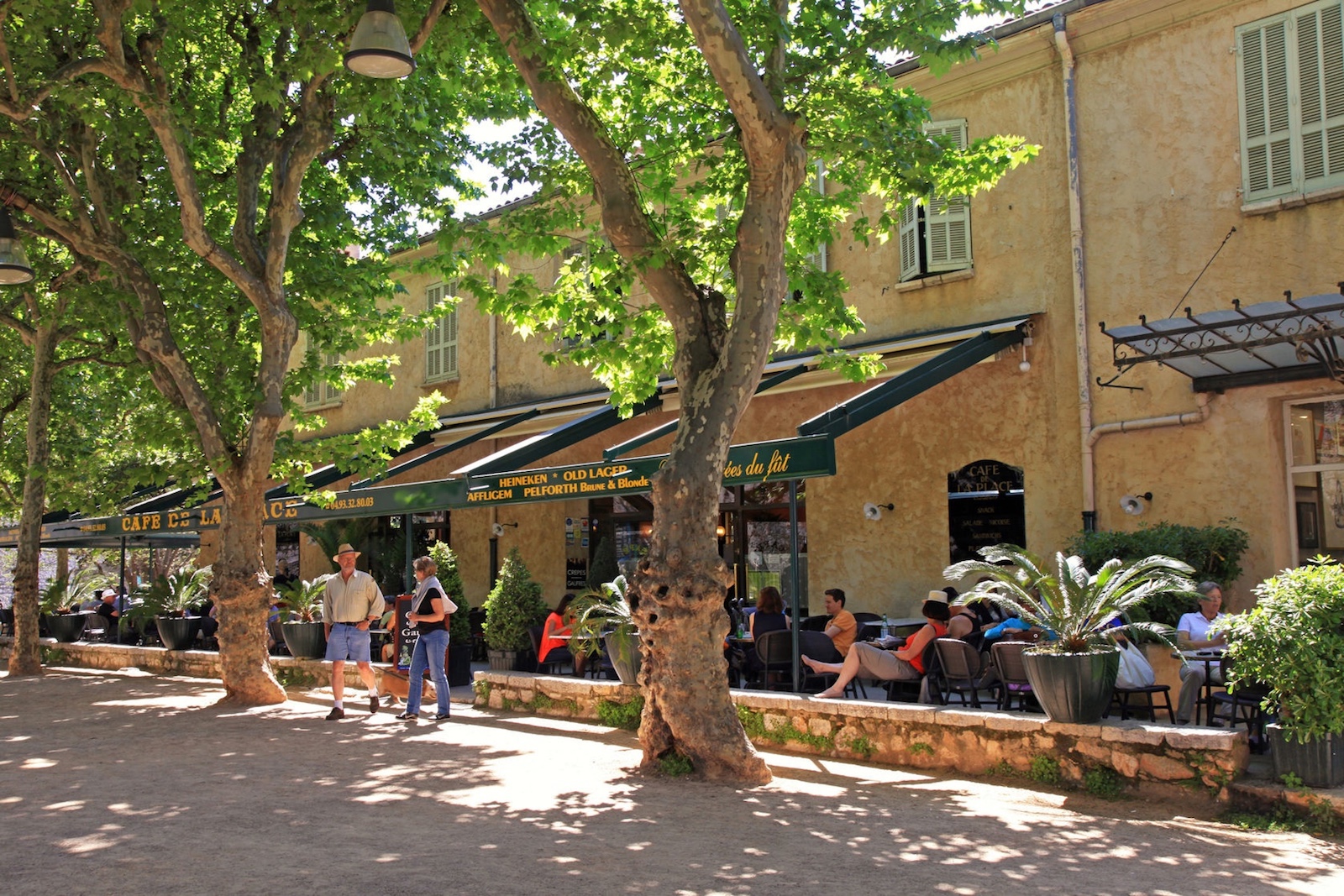 Local’s tip: If you’re crowd-averse, we suggest visiting St Paul de Vence either early in the morning or in the early summer evening after 6pm, when the bustling crowds are long gone, the cobbled streets are quiet, and you get to experience that desperately bewitching French Riviera light as it turns the buildings golden and pink.

Mougins: A Haven of Gastronomy and Classical Art

Seen from above, Mougins is a spiral, its jumble of roofs resembling the patterns on a snail shell. Going down into that cluster of buildings perched on a gentle hill in the forest behind Cannes, you’ll find a gastronomic paradise, where Michelin-star restaurants lie in cobbled alleyways and in terrace gardens by ancient almond mills. There’s a thriving art scene too, with many galleries, as well as the excellent private collection at the Mougins Museum of Classical Art, which displays works from antiquity as well as modern pieces by Hirst and Picasso. 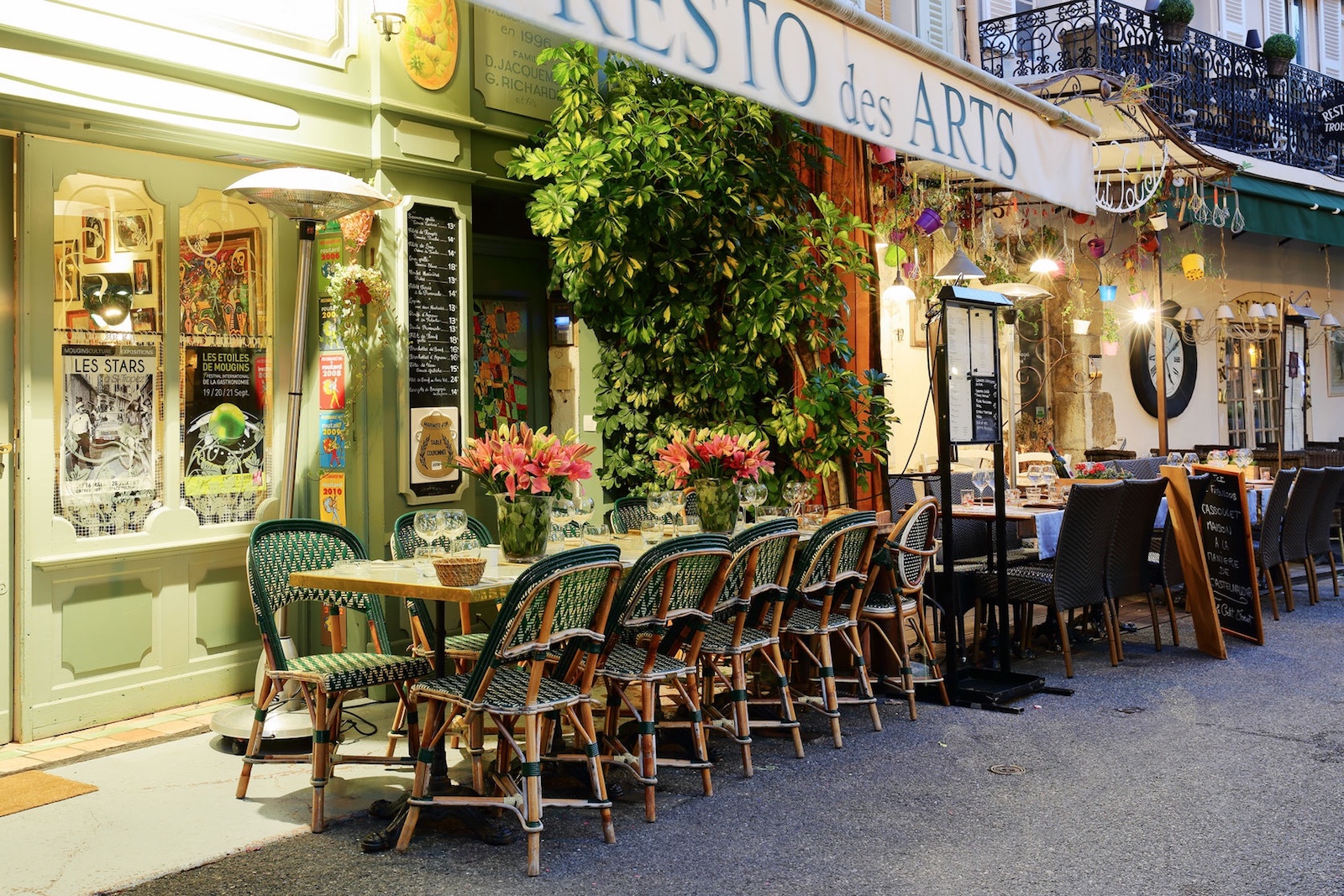 Mougins has long been attractive to the influential, with Winston Churchill visiting to paint, and Picasso making his home here for the last decade of his life. Today, there’s an affluence you can feel, with grand villas shaded by pines and expensive boutiques lining the charming streets. Mougins may not have the staggering setting or the deep medieval feel of the earlier entries on this list, but when it comes to French gastronomy in particular, this pretty hill village has the others (and much of the Riviera) well-beaten.

We could go on, of course—to Biot and Gassin and flowery Bormes-les-Mimosa, just to name a few.

To find out more about how you can incorporate the prettiest hill villages into your yachting itinerary, contact the French Riviera specialists, Bespoke Yacht Charter.